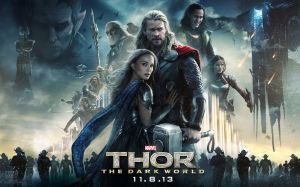 Thor: The Dark World was good with decent graphics and quite a bit of action. However, I have to say this sequel was not as good as the first Thor. Maybe this is because the first Thor was directed by Kenneth Branagh and this one by Alan Taylor? The sequel had a video game feeling in many of the action scenes.

The actors were the same in the first Thor and this is a plus for the sequel. Chris Hemsworth plays Thor and his love interest Jane Foster, played by Natalie Portman are decent but the interaction of the two, romantically, left the audience lacking. This is primarily why I gave the movie an 8 out of 10.  I mean come on, Jane only comes back into Thor’s life after two years as a host for a foreign glob of something or other, and there is no real romantic anything going on as was in the first Thor. I believe the movie needed the two to reconnect for more than just Portman being a glob host.

In the first movie you see the bridge broken and Thor cannot get back to Jane. In Thor: The Dark World you see that sparkly bridge all repaired yet, all Thor does is check in on Jane? This is a huge aspect of what is missing in the sequel.

The bad guys are good and believable for the most part. Loki, played by Tom Hiddleston, is the perfect villain brother whom when it really matters, takes his brother’s side. This is the redeeming factor in this movie. The audience can sympathize with the brothers rivalry.

Overall, Thor: The Dark World is a decent sequel and well worth seeing. Stay for after the credits to get the bonus scene which lets the audience know there will for sure being a Thor 3.

I am the person who gives excellent advice. Yes, I am that good! I am a writer, a mom, a Nana (yes hard to believe I know!), a professional, educated, and has the ability to look at anything objectively. I write about everything and anything. I do this because there are many facets in my life. I am also a Coffee Lover and that alone makes me awesome. ~Me View All Posts

This site uses Akismet to reduce spam. Learn how your comment data is processed.