Guest blogger and writer Rafael Morales from Orlando, Florida went to see Divergent and gave his personal review of the movie. I have not seen Divergent yet but have heard the movie was worth seeing.

Free will. Independence. Fight against authority. Individuality. Ever since the dawn of men, those very subjects have been the basis for thousands of thesis and studies, specially seeking its concept and what it means to each person. Divergent will fall in the long list of movies that tackle this very study.

Here are the stats for Divergent: 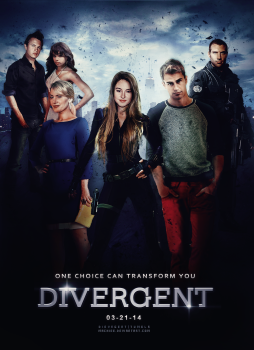 Disclose: I have never read the books, nor did I knew about them until a couple of days before the movie.

Screenplay: You won’t find an out of your mind-body experience when it comes to Divergent being thought-provoking. Following the script as it evolves on the screen doesn’t require too much mental power. However, there are portions at the beginning where it does require a bit of fortitude, acceptance of this dystopian future, and lots of rolling your eyes to allow the director and the writers to take you through this story. It doesn’t require a rocket scientist that the lead character Beatrix “Tris” will be a savior of sorts, and that there will be some sort of love/romantic affair between her and her trainer Tobias “Four”.

Divergent grows on you slowly and you start to care about the characters and their future, which makes the screenplay good. Once the action starts you see the different subjects being the foundation to the storyline, meeting the characters, then the pace of the movie changes, and become as brisk and wonderful to follow. I found myself wanting more of the character Jeanine Matthew,our main baddie. Divergent needed more time meeting each faction of this future and how the government worked to make the story better. Divergent had a good pace and it was thoughtfully done in both the romantic and action scenes of the movie.
Production/Special Effects: This is not the Matrix or Star Wars or any of the Star Trek movies, so if you are looking for Divergent to produce special effects then you are in the wrong movie. I love how the producers transformed the entire city of Chicago into a wasteland and it is nice that it was shot in Chicago itself, which adds to the feel of the movie.
Acting: Divergent wont win any Oscars for best acting but overall it was decent. It is nice to see Mrs. Ashley Judd again on the big screen as she adds a nice motherly feel to the movie. Kate Winslet is another standout
playing a baddie in the movie even though she had a small part, this actress is great.
Which brings me to our two love birds: Shailene Woodley which has surprise me with the different movies she has tackled. She was in “The Descendants” with George Clooney  in a which I am eager to see, “The Fault in Our Stars”. Shailene Woodley is one to watch and hopefully she will have wonderful nomination in the future. As for this movie, she allows us to believe in her character and her different decisions. One can get lost in her gooey expressive eyes for the pain and the focus needed.
As far as the other love bird: Theo James, I have never seen him before on the big screen, but he has a tough exterior with a subtle restraint in regards to who he is as a character. The director really brings out the protecting mentor as a man who has a past that has made him who he is, which is good.
Divergent is attractive, fun, and well worth the price of admission.

I am the person who gives excellent advice. Yes, I am that good! I am a writer, a mom, a Nana (yes hard to believe I know!), a professional, educated, and has the ability to look at anything objectively. I write about everything and anything. I do this because there are many facets in my life. I am also a Coffee Lover and that alone makes me awesome. ~Me View All Posts

This site uses Akismet to reduce spam. Learn how your comment data is processed.