So this past weekend I am going through the junk mail fliers and all the suddenly I see the perfect coupon; “Free Krispy Kreme donut of your choice”.  YES! I have just won the donut lottery! In that moment I wanted all of my neighbors junk mail so I could get those coupons.  What’s wrong with having 20 or 30 free donut coupons? LOL That’s like one free donut everyday for a month!

What’s not to love about them? The first bite is like meeting a new lover. You see the donut; it’s a cream filled, dark chocolate topped, angel from heaven. It’s even swirled with caramel for added deliciousness. Inspecting the donut you can’t wait to get to know the donut bite by bite. The smell is like heaven to the nostrils. It’s intoxicating!

That first kiss is like taking that first bite. The tongue tingled with the sensation of deliciousness as the first bite makes you close your eyes and say, “This is so sinfully delicious.” In that moment, which is approximately 1-2 minutes (since you cannot put the donut down until its satisfyingly all in your tummy) you’re in the “love affair zone”.

The Edinburgh residents in Scotland can appreciate the delicacy that is only known through Krispy Kreme donuts.  The new Edinburgh Krispy Kreme store opened in February 2013 with the population waiting hours just to get their first taste of this American treat. One resident stated he took a bus and then a taxi to get to the new store, only to wait an additional hour or two to sample the deliciousness. But one resident did not mind waiting as Krispy Kreme provided free donuts while people waited. Aren’t they just “sweet” like that?

Below are the very donuts I bought. They are from the new “Caramel Chocolate line”. I am showing you this as I am not ashamed that I bought 3 donuts. I probably did not need to eat two of them at once (yes, I saved one for the next day-but trust me it was HARD LOL).

I know some of you may be thinking, “She’s crazy, she can’t eat donuts and still lose weight.” The key here is one (or two-opps). Not 4 or 5. Which is very easy to do since this “lover” is quick into the tummy with a backlash of yum yum yumminess that you can still taste long after the donut is gone. (Kissing my finger tips into the air like an Italian). 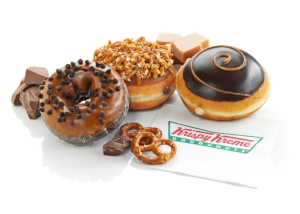 There are days when a woman just needs something sweet. You men love donuts too! LOL don’t even deny it! I am not endorsing anyone to go and eat a Krispy Kreme donut however, if you continually deny yourself you will overeat on something worse than a donut or two. With that said I went to see my doctor on Tuesday. She said, “Kelly, your doing great! In fact you have lost 10 lbs since the last time I seen you. Keep doing whatever you’re doing.” YES MA’AM!